The 11th podcast in the EFACIS Irish Itinerary: Marisol Morales-Ladrón and Emma Donoghue

The 11th podcast in the EFACIS Irish Itinerary: Marisol Morales-Ladrón and Emma Donoghue 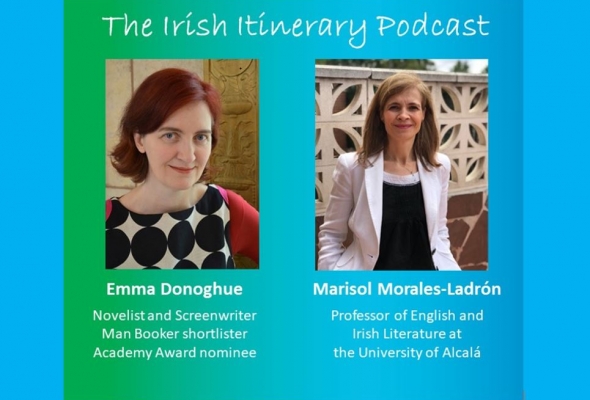 In her discussion with Marisol Morales-Ladrón, Irish-Canadian writer Emma Donoghue reads from her latest novel The Pull of the Stars (2020) and explores its themes of childbirth, motherhood, and lesbian love setagainst the backdrop of the 1918 Spanish Flu pandemic.

They also discuss the setting in a maternity ward in Dublin, the challenge of examining and presenting Irish national history from a female perspective and trace some autobiographical references in the novel.

The 10th podcast in the EFACIS Irish Itinerary: In her discussion with James Gallacher,  Rosemary Jenkinson discusses her time in Europe, the continuing visibility of Northern Irish writers within European literature amidst the saga of Brexit, and gives her perspective on COVID19’s impact on the arts in Ireland. She also discusses themes of poverty, death, and sex trafficking in her latest short story collection Lifestyle Choice 10mg, while also reflecting on the legacy of conflict and residual paramilitarism in contemporary

The 9th podcast in the EFACIS Irish Itinerary: In his conversation with Michael Lydon, Oein DeBhairduin reveals the pleasure of writing, explains the process of collating andtranscribing folk tales, discusses the challenges and excitements of transmitting oral literature to paper, and comments on contemporaryIrish Traveller identity, while also reading from his latest work, "Why the Moon Travel".

The 8th podcast in the EFACIS Irish Itinerary: In his conversation with Síle Ní Choincheannain, Irish novelist, playwright and translator Darach Ó Scolaí compares the contemporary Anglo-Irish novel and the Irish language novel; reflects on the European tradition of Irish writing and on his fascination for dark works and historical novels; talks about his translations of Robert Louis Stevenson’s Treasure Island and other English classics into Irish; and reads from his award-winning historical novel An Cléireach.

The 7th podcast in the EFACIS Irish Itinerary: In his conversation with James Little, Irish drummer and composer Matthew Jacobson discusses his new album Mere Nation, the plans for new-music label Diatribe Records, the evolving interrelationship between education and music performance in Ireland as well as the origins of his slightly weird obsession with palindromes.

The 6th podcast in the EFACIS Irish Itinerary: Katarzyna Ojrzyńska from University of Lodz discusses acting techniques and performing with intellectual disability, with Petal Pilley &Charlene Kelly of the Blue Teapot theatre company. In their conversation with Katarzyna Ojrzyńska, Petal Pillar and Charlene Kelly talk about the history of the Blue Teapot Theatre Company and the Blue Teapot Performing Arts School, about synergistic prompting and the Meisner technique, the arts and the decriminalisation of sex with people with intellectual disability in Ireland, challenges of performing on stage and in front of a camera for actors with ID, and Blue Teapot’s involvement with the European project "Crossing the Line". The conversation also revolves around Charlene Kelly's play Into the Dark Woods, the postponed premiere at the Abbey Theatre and other difficulties related to Covid-19.

The 5th podcast in the EFACIS Irish Itinerary: Pilar Villar-Argáiz poet, translator and novelist  in conversation withTheo Dorgan reads from his work and talks about the mysteries of love poetry, his translations of Frederico García Lorca’s poetry, the power of the Irish language with international audiences and about writing in Irish English, the figure of the rebel and class injustice, ways of transcending European borders, the abiding influence of Greek mythology in his work, Cork winters and feeling at home in Athens, as well as gestures in the imagination that can bring about political change.

The 4th podcast in the EFACIS Irish Itinerary: Laoighsceach Ní Choistealbha and Alan Titley of NUI Galway discuss the Irish language in contemporary global contexts. In his discussion with Laoighseach Ní Choistealbha, Alan Titley talks about the significance of the Irish language in contemporary Ireland, takes a critical stance towards Europe, reflects on his experiences in Africa, on writing in different genres, an author’s inspirations, and the joys of writing provocative texts; he also discusses the longevity and social relevance of Irish language literature and the challenges that Irish language authors face on the book market today.

The 3rd podcast in the EFACIS Irish Itinerary: Paul Lynch in conversation with Sylvie Mikowski discusses the significance of his childhood in County Donegal and how aspects of it resurface throughout his literary career. His use of historical material to comment on the present, the significance of plot and the depiction of character psychologies. Also his reference to the Zen tradition in Beyond the Sea, and on the intersection of style, rhythm and his aspiration to represent “the feeling of the present.