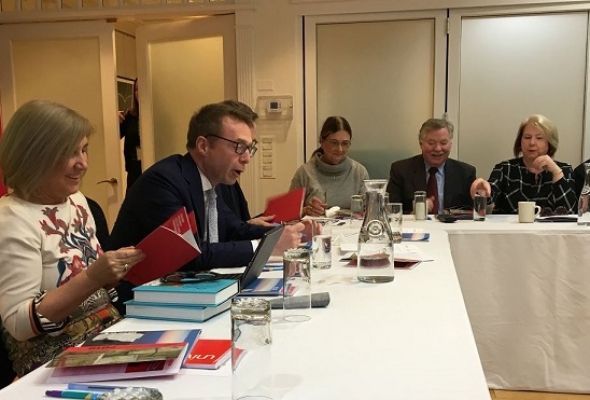 More than 120 North American-based presenters and programmers of Irish culture met Culture Ireland and the Ireland Consular Network virtually, for the 4th annual meeting of the Network of Irish Cultural Centres of North America (NICCoNA).

Co-hosted by the Consulate of Ireland in New York and Culture Ireland, in New York on Thursday, 28 January 2021, NICCoNA is a state-and-province wide association of presenters and programmers of Irish culture based in the USA and Canada. Members including Irish Arts Center and Irish Repertory Theatre in New York, Contemporary Irish Arts Center in Los Angeles and the Milwaukee Irish Fest present a regular annual programme of Irish arts, which have been severely impacted by COVID-19 restrictions.
The meeting focussed on future planning and the ways members could continue to operate and programme including online presentation of Irish artists with Culture Ireland support.

The agenda included an overview by Ireland’s Ambassador to the USA, Daniel Mulhall of upcoming events across the US and Canada to celebrate both St Brigid’s Day and St. Patrick’s Day. Each of the eight US and Canada based Consul Generals (representing Atlanta, Austin, Boston, Chicago, Ottawa, Los Angeles, San Francisco and New York) also attended the meeting to meet and share concerns with their regional centres and programmers.

Participants were introduced to the work of a  selection of artists showcasing at the upcoming Folk Alliance International Conference and South by Southwest SXSW  as well as a sneak-peek at the upcoming Ireland in Music film due to broadcast on PBS around St. Patrick’s Day.

Director of Culture Ireland, Christine Sisk said: “The strong attendance at this gathering is a true indicator of the interest in Irish arts in the US and Canada. Culture Ireland support of online performances will enable Irish artists to reach North American audiences until artists can travel and perform again in person in these fantastic venues.”

Consul General of Ireland in New York, Ciaran Madden said: “Of course we are disappointed not to be gathering in person as we usually do this time of year in New York but the great benefit of these times is that we can welcome even more people to the table and it’s so encouraging to see so many people and organizations from across the continent.”

At the 2020 meeting of NICCoNA it was announced that the Government of Ireland would appoint a New York-based Cultural Officer. Such an appointment was made in November 2020 and  the Newly appointed Head of Cultural Affairs in New York, Nik Quaife said: “I am very much looking forward to working with Culture Ireland and the US Embassy Network to create opportunities for Irish artists across the US and Canada.”