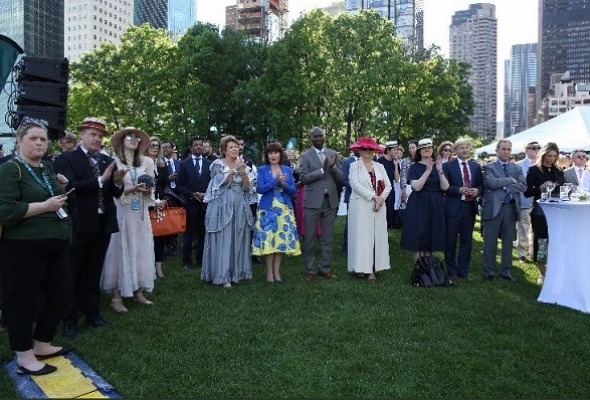 The Minister for Culture, Heritage and the Gaeltacht, Josepha Madigan TD, has hosted the first celebration of Bloomsday at United Nations Headquarters, organised by the Permanent Mission of Ireland to the United Nations, in New York City.

Invitations were extended to 192 Permanent Representatives to the United Nations, select contacts and Irish community guests. Around 200 guests attended the event which  took the form of a garden party.

The event offered an opportunity to showcase Ireland as a literary nation, bringing James Joyce and Leopold Bloom,  themselves some of Ireland’s most important and effective Ambassadors,  to the United Nations. In addition, Bloomsday celebrates the values at the heart of Ireland’s cultural diplomacy: empathy and a common humanity.

The universality of this message is evidenced by the fact that Ulysses has been translated into over 20 languages, including Russian and Mandarin Chinese. In the book, Joyce, through Bloom, shows a strong commitment to tolerance and pluralism. These are values that Ireland works to promote every day both at home and throughout the world, including at the United Nations.

Ireland’s Department of Culture, Heritage and the Gaeltacht has had close ties with Irish artists and arts in New York,  particularly through The Irish Arts Center for which it provides annual support.
The new Irish Arts Center is set to be a flagship 21st century destination from which established and emerging Irish artists - across a range of disciplines -  can reach develop their art, reach new audience and connect with their peers.  It will be a place for artists to tell their story in a permanent, creative home that is nurturing, hospitable and engaged with their artistic and professional goals.