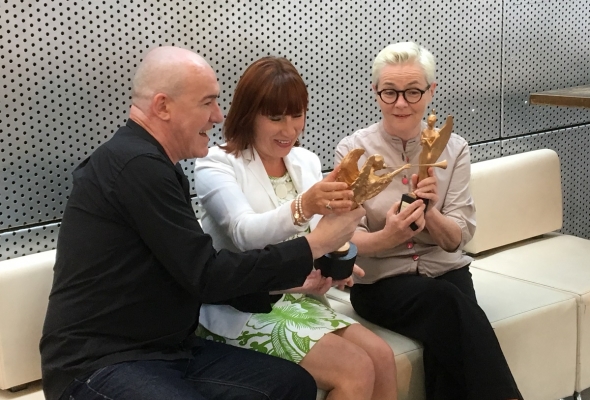 At an event to mark the achievement of Irish artists at the Edinburgh Festivals this year, the Minister for Culture, Heritage and Gaeltacht Affairs, Josepha Madigan TD, announced approval of €680,200 in grant funding by Culture Ireland for the promotion of Irish arts globally.

Pat Kinevane and Gina Moxley - who have just returned from the Culture Ireland Showcase at Edinburgh - both received much-coveted Awards at the Edinburgh Festivals.

Kinevane who was presenting his play Before produced by Fishamble New Play Theatre Company scooped a Herald Archangel award for sustained contribution to the Edinburgh Festival Fringe. This follows Kinevane’s previous successes in the Culture Ireland Edinburgh Showcase in 2011 when Silent was awarded a Scotsman Fringe First Award, and 2015 when Underneath, also written and performed by Kinevane, won a Fringe First Award 2015.

Gina Moxley, received Fringe First and Herald Angel awards for her show The Patient Gloria which was produced by the Abbey in association with PanPan Theatre Company and presented at the Traverse Theatre, Edinburgh.

Congratulating the artists on their successes Minister Madigan said "Once again Irish artists have excelled on the world stage, demonstrating their unique talents and commitment to their work.  Culture Ireland supports the Edinburgh Showcase to gain further touring contracts for Irish artists and this year Irish artists have already achieved further international opportunities for shows they presented. This is so important as it enables artists sustain their careers and allow new audiences to experience Irish arts. Our culture is very much part of our global identity and by enabling our artists to travel, Ireland’s global reputation for creativity is enhanced, in keeping with the Government’s Global Ireland 2025 programme."

The funding announced by the Minister will enable Irish artists and arts organisations to present 125 projects, covering circus, dance, film, literature, music, theatre and visual arts in 40 different countries and bring Ireland’s artists to new audiences and help renew relationships with existing audiences. Included in the projects being funded is Pat Kinevane’s play Before produced by Fishamble New Play Theatre Company which will be presented in Los Angeles in November/December 2019.

The funding also covers a strong and varied representation of Irish musicians including the Irish Chamber Orchestra, David Keenan, and The Riptide Movement will perform in venues from Los Angeles to Tokyo at large music festivals and high profile venues. International dance performances include John Scott dance in France, Colin Dunne in Sweden and performances of Oona Doherty’s contemporary Irish dance, Hope, Hunt and the Ascension into Lazarus in Seoul, South Korea, Hong Kong and Quito, Ecuador between October 2019 and February 2020.

A highlight of the visual arts programme is Brian Maguire’s exhibition The Shock of Thought / War Changes its Address which will be shown in Mexico, NY and Washington DC over the course of a year. Irish writers will present their work at 22 literature events around the world, including the Hay writer’s festival in Columbia and other locations throughout South America.

Owing to the success of the Culture Ireland GB18 Programme, a year-long focus of Irish arts in Britain last year, there has been a 17% increase in supported application for events across many art forms for Irish artists to present their work in Great Britain including Gare St Lazare’s How It Is (Part Two) by Samuel Beckett at The Coronet Theatre, London in April – May 2020 and the screening of Irish films by Irish Film London between September and December 2020.

Please see www.cultureireland.ie for the full listing of the Summer Grant Round awards and Edinburgh Showcase Programme.