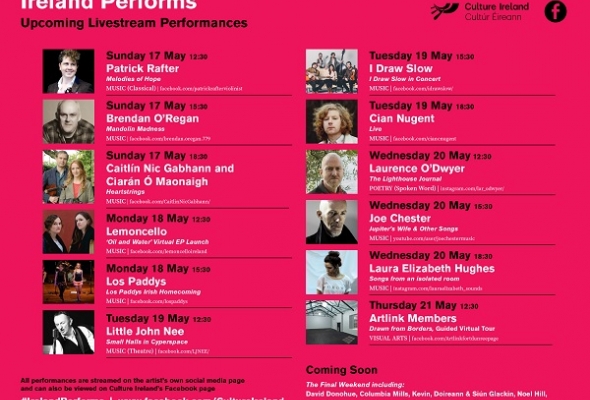 Minister Madigan confirms Ireland Performs scheme extended with additional €20,000 to run daily events until Sunday 24th May to reach a total of 120 events

- 100 performances will be reached this weekend
- Total viewership is 530,000 to date
- 497 applications have been received
- Next week, the sixth week will see performances from acts such as Lemoncello, I Draw Slow, The Finns, Ryan McMullan, Eleanor Shanley, Laoise Kelly, Curtis Walsh, Joe Chester, Columbia Mills, Cian Nugent and more.

Josepha Madigan, T.D., Minister for Culture, Heritage and the Gaeltacht has announced the extension of Ireland Performs, the Culture Ireland scheme in partnership with Facebook Ireland which kicked into live action on 13 April and will to reach its 100th performance this weekend.

Minister Madigan, announcing that an additional €20,000 has been allocated for this online initiative said “there has been such a fantastic and diverse range of artists who have won the attention of global audiences with over half a million viewers to date worldwide. I wish to extend this initiative in the light of this success and as a measure to support more artists to perform and ensure that the arts can continue to be enjoyed online”.

A wealth of Irish artists have been sharing their talent with global audiences from their homes across Ireland. Covering music (Traditional, Rock, Pop, Indie, Folk, Classical, Opera, Jazz), theatre, visual arts, spoken word, poetry, circus/street, family and storytelling. Artists have used the opportunity to launch their EPs, books and connect with audiences where tour dates have been lost.

There have been performances in myriad locations including living rooms, kitchens, bedrooms, music rooms, garden sheds, workshops, the streets, polytunnels, back gardens, front gardens, the beach, camper vans from all over Ireland.

A special focus was placed on musicians who were due to perform at high profile international showcases such as SXSW and The Great Escape including acts such as Alex Gough, Junior Brother, Somebody's Child, Lilla Vargen, Ryan McMullen, Tebi Rex, Ailbhe Reddy, Malaki and Thumper.

People all across Ireland and the world can tune in online on Culture Ireland’s Facebook page https://www.facebook.com/CultureIreland/

The scheme is providing €120,000 in a short-term relief fund to pay professional Irish artists for the presentation of their work online. Featured artists are being paid €1,000 for their performance and the scheme has been running for four weeks. Minister Madigan said “I am aware that there is no substitute for live experience of art, but this is one of a number of short term initiatives which my Department is supporting, that aims to provide an effective short-term solution, while showcasing some of the best of Irish talent across the world”.

Ireland Performs is supported by Facebook Ireland and the Department of Culture, Heritage & the Gaeltacht’s Culture Ireland programme, and delivered in partnership with First Music Contact and Poetry Ireland.