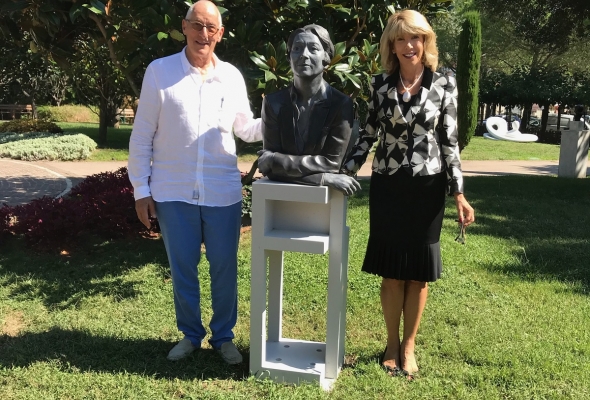 Josepha Madigan, Minister for Culture, Heritage and the Gaeltacht congratulates Irish sculptors Eilis O' Connell and Vera Klute on their work to mark the contribution of Irish born Eileen Gray to French and international arts, which is supported by Culture Ireland.

Today 11 September 2018 His Serene Highness, Prince Albert of Monaco, accompanied by Patricia O’Brien, Ireland’s Ambassador to France, will open the Art’Bre sculpture exhibition in Roquebrune-Cap-Martin, featuring a commissioned bust of Eileen Gray by Dublin’s Vera Klute and a selection of works by Eilis O’Connell.

Minister Madigan said that “Eileen Gray was a pioneer and model for female architects and designers. In this special year with Irish architects Shelley McNamara and Yvonne Farrell curating the Venice Biennale it is timely to mark Gray’s contribution and I congratulate  Eilis O’Connell and Vera Klute, two of Ireland’s leading contemporary female sculptors for their outstanding work”.

Eileen Gray, a pioneer of the Modernist movement in architecture and furniture designer was born in Enniscorthy but spent much of her life in France. Her achievements will be marked at the house designed by Gray in Cap Moderne where the bust of Gray by Klute and Eilis O’Connell sculpture exhibition, curated by Patrick T Murphy of the Royal Hibernian Gallery are sited. Further works by O’Connell will be displayed in the Municipal Park for the month of September.

Culture Ireland, a Division of the Department of Culture, Heritage and the Gaeltacht awarded support of €25,000 for the travel and transport elements related Vera Klute to Eilis O’Connell’s work.

In 2013, Culture Ireland supported a major retrospective of Eileen Gray at the Centre Pompidou in Paris as part of Ireland’s EU Presidency.