Brian Maguire: From Juárez to Washington, War Changes Its Address

Brian Maguire: From Juárez to Washington, War Changes Its Address 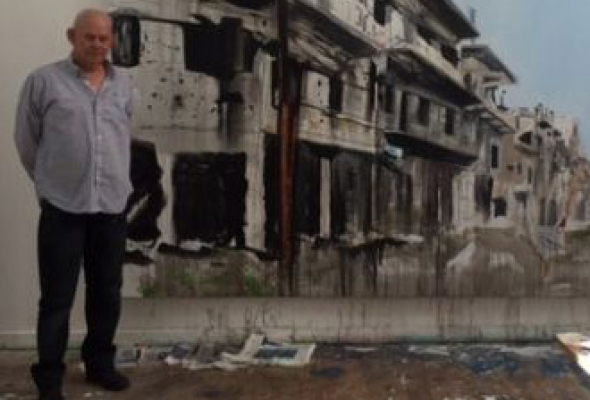 Culture Ireland is proud to support a year-long abbreviated retrospective by Brian Maguire across cities in North America which begins this week and continues until August 2020.

The first exhibition Scenes of Absence (Escenarios de Ausencia) opens at Museo de Arte de Ciudad Juarez, Mexico on Friday 20th September and at Rubin Centre, El Paso, Texas, on 26th September followed by shows at the UN Headquarters, New York and American University Museum, Washington DC, USA.
This retrospective of Irish artist Brian Maguire showcases his large-scale work in response to zones of conflict around the world.  It features paintings from throughout Maguire’s decades-long career and deals with a diverse constellation of global struggles from the Troubles to the streets of Aleppo and beyond, drawing complex connections between a broad cast of humans who have been left in the shadows of global capitalism, while at the same time highlighting the Maguire’s special relationship to his subjects.
The exhibition Escenarios de Ausencia is a cross-border collaboration between Museo de Arte de Ciudad Juárez and Rubin Center for the Visual Arts in El Paso, Texas, where a complementary series of works will be on display from September 26th – December 13th. The cross-border nature of this exhibition reflects the ways in which the subject matter in Maguire’s paintings connect these locations, both in complicity but also in humanity.